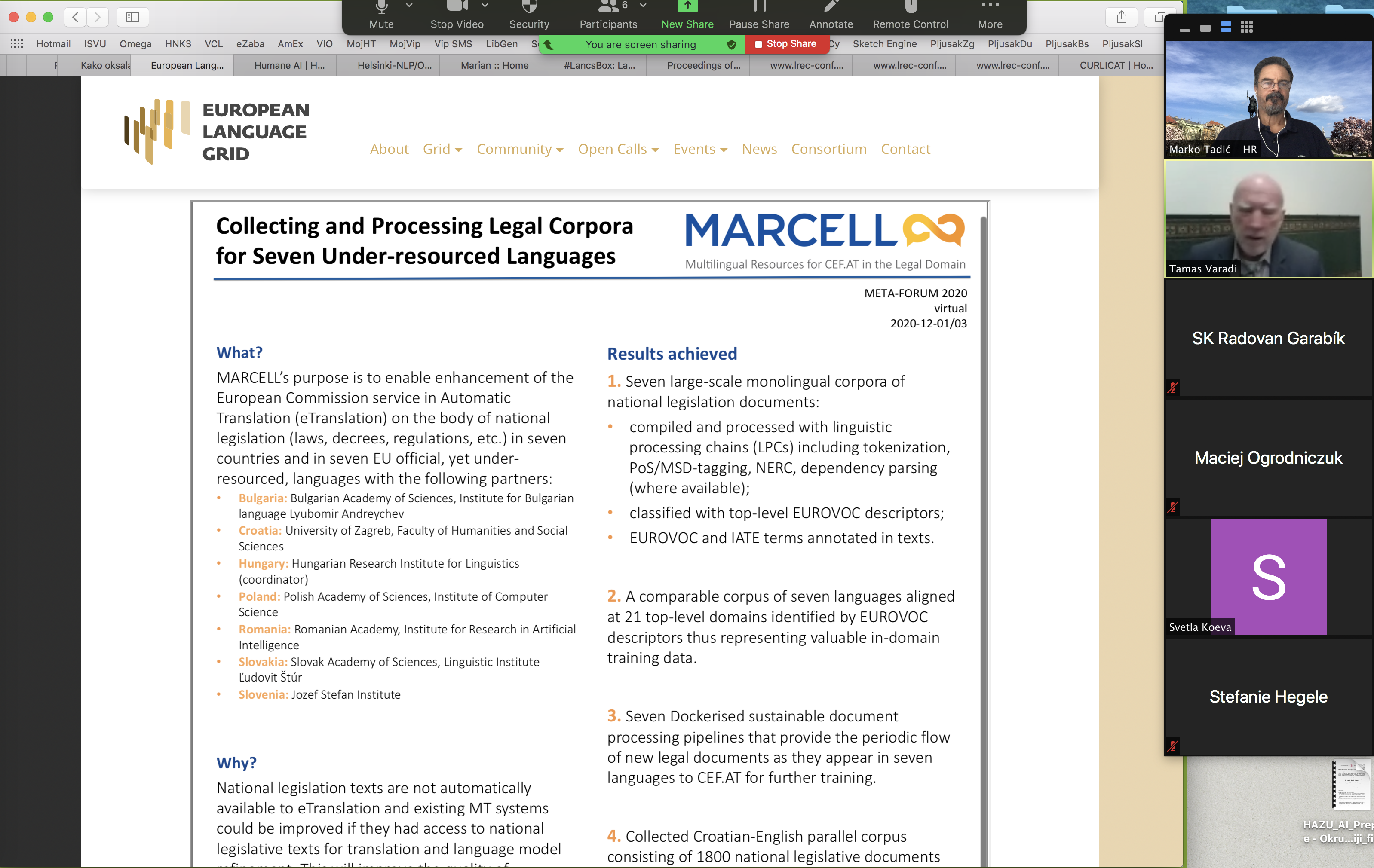 MARCELL presented at the META-FORUM2020

The META-FORUM 2020 was held in virtually manner from 2020-12-01 until 2020-12-03. At this conference where members of language technologies community meet with their technical and political partners, the MARCELL project was presented at the Project Expo. MARCELL poster was installed in a separate virtual room, where it draw considerable interest that produced an interesting discussion on its usefulness, availability and sustainability. 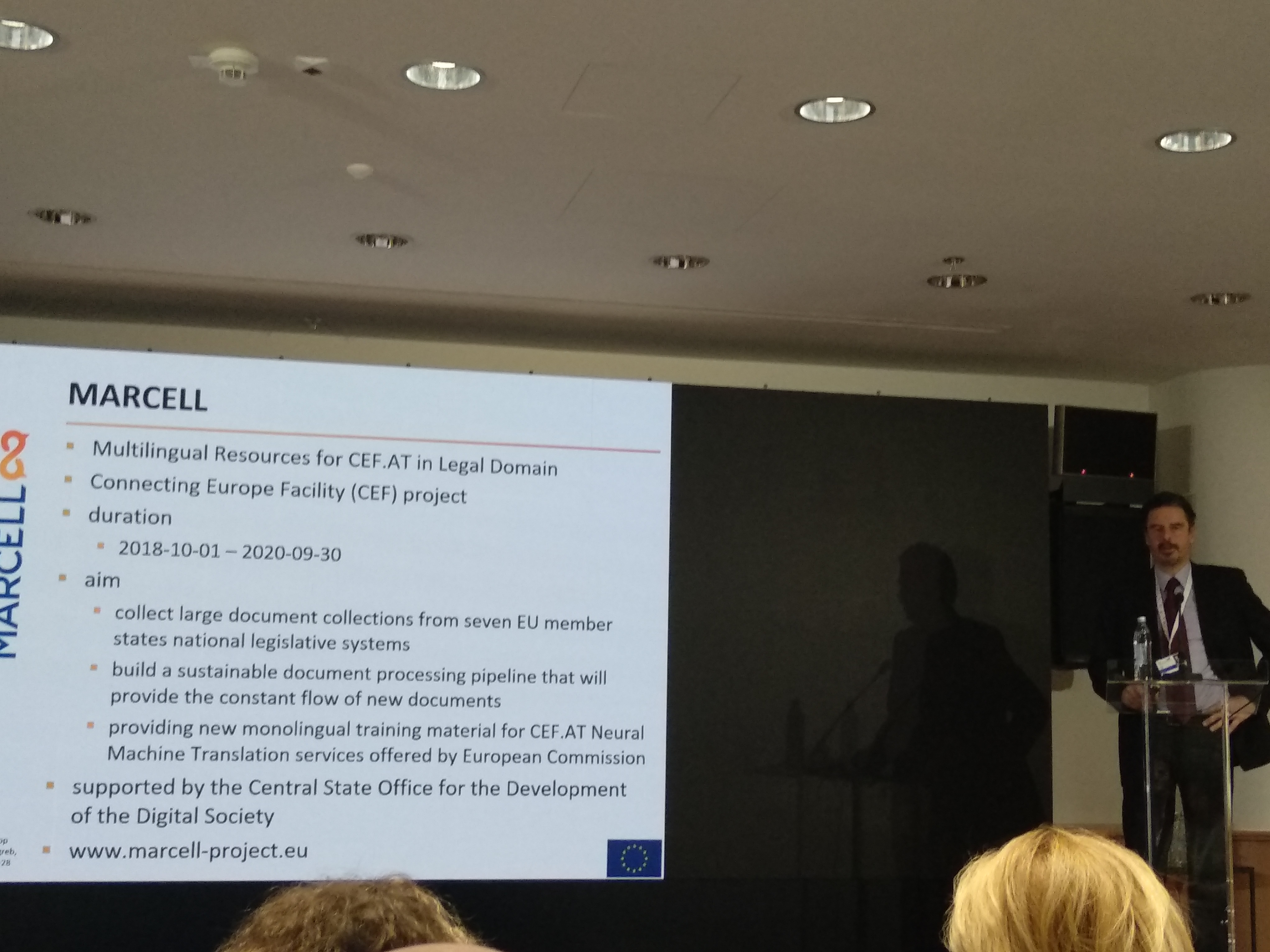 The introductory workshop of the CEF-project EU Council Presidency Translator was held in Zagreb on 2020-01-28 presenting the first results of the MT tool that was developed for English-Croatian and Croatian-English directions by Tilde, Riga (Latvia) and University of Zagreb, Faculty of Humanities and Social Sciences, Zagreb (Croatia). Participanats were many translation and localisation professionals, predominantly from different bodies of Croatian public authorities and industry, but also with the participation of the Croatian translators from several EU bodies. Since a member of MARCELL project, Marko Tadić was also involved in the development of this MT system, he used this opportunity to also present the MARCELL project as one of the most important sources of language resources for training similar MT systems, that will soon be freely available to translators and CEF.AT users. Additionally, the information about the MARCELL project was also disseminated by the poster and flyers. 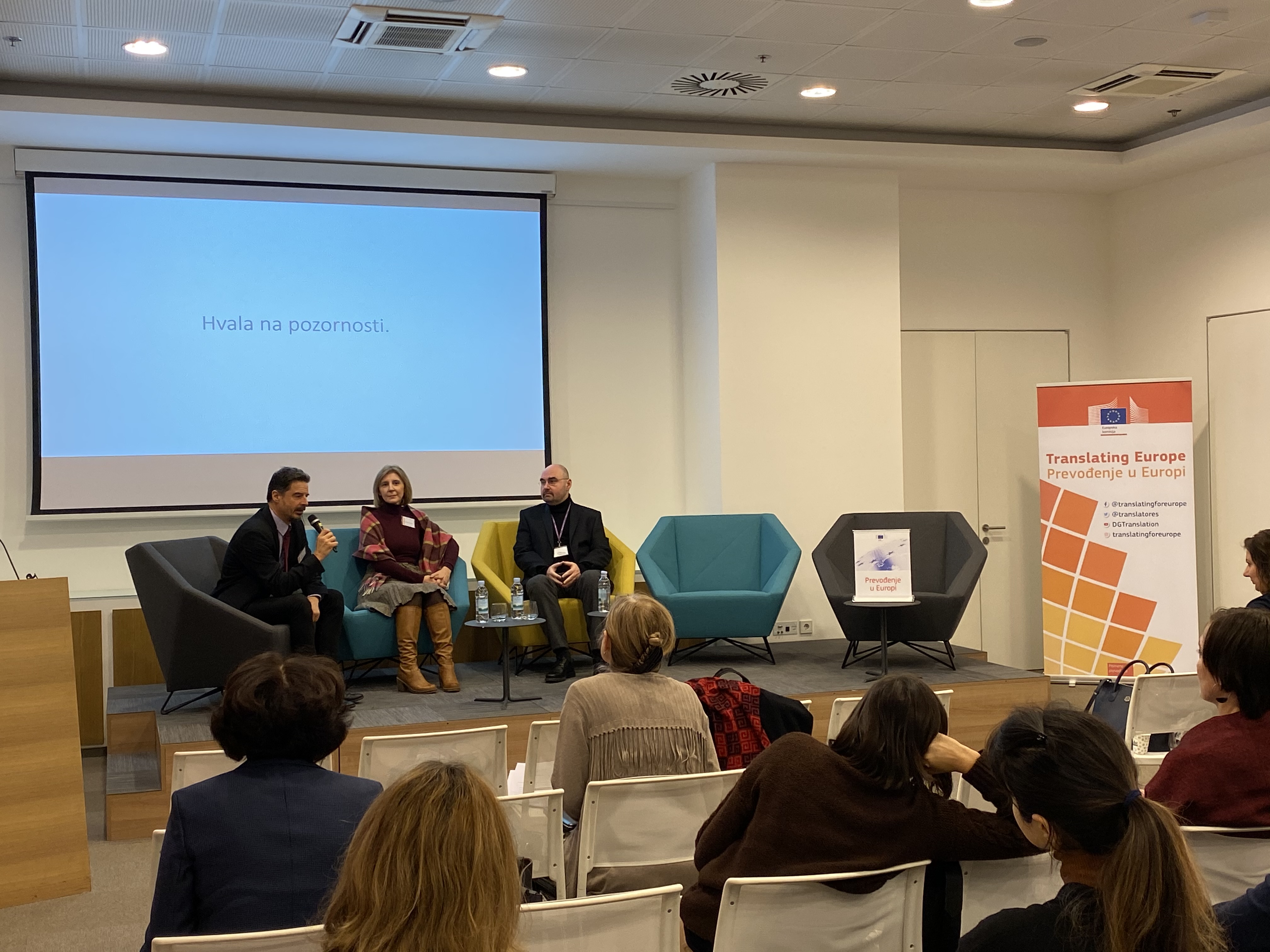 The annual DGT’s Translating Europe Workshop in 2019 for Croatia was held in Zagreb on 2019-12-06 in the Europa House. Participanats were many translation and localisation professionals, predominantly from industry, but also with the participation of the Croatian translators from several EU bodies. This series of workshops is organised every year in all member-states and the particular topic this year in Croatia was Corpora for translation quality. Since a member of MARCELL project, Marko Tadić was the invited speaker, he used this opportunity to also present the MARCELL project and the role of corpora being collected within, as one of the most important language resources that will soon be freely available to translators and CEF.AT users. Additionally, the information about the MARCELL project was also disseminated by flyers. 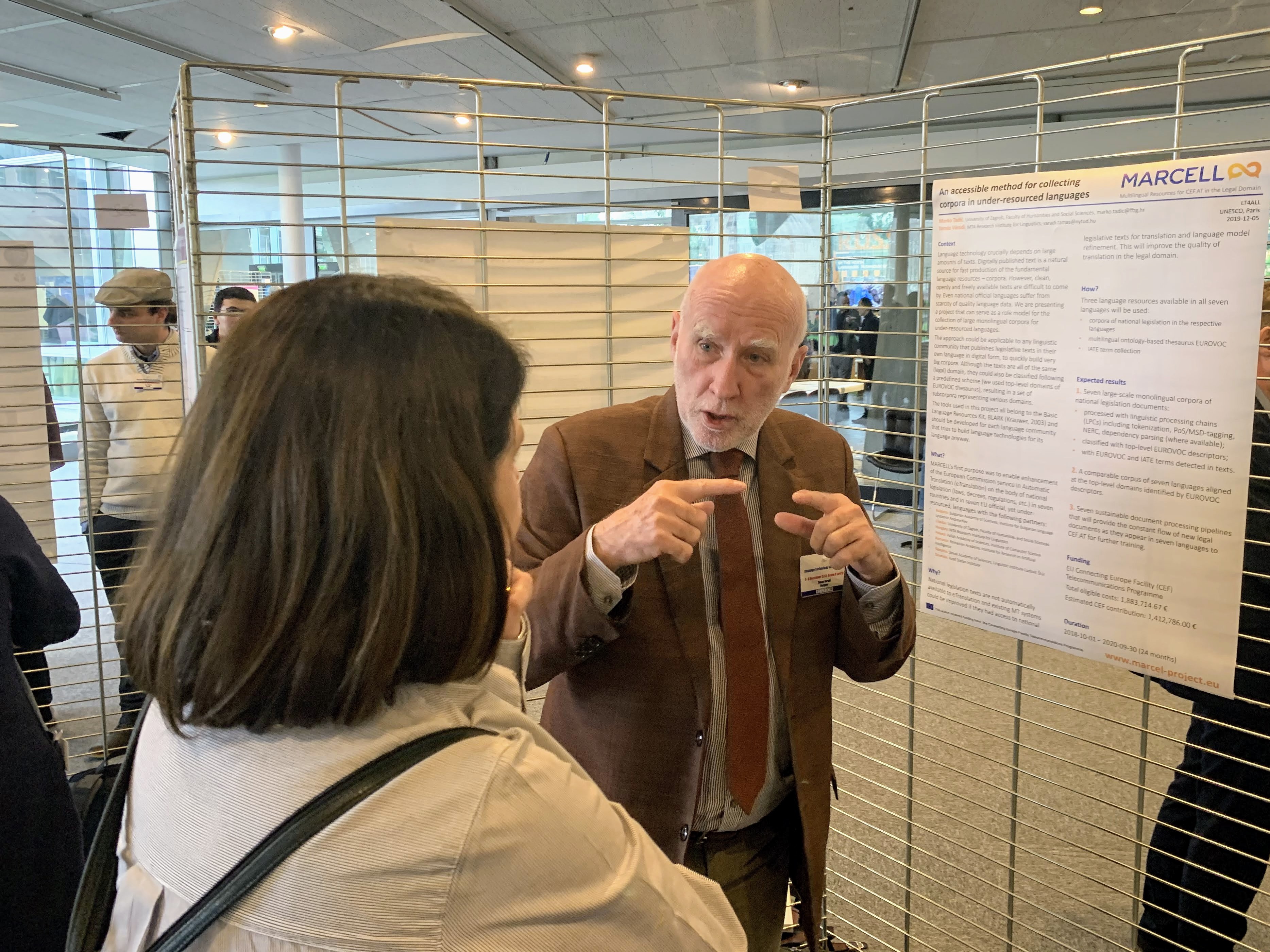 MARCELL presented at the LT4ALL Conference

The Language Technologies For All event was a major conference organised by the UNESCO within the framework of the 2019 International Year of Indigenous Languages. Accordingly, the central theme of the conference was to explore how language technology can support the low-resourced and indigeneous languages all over the world. The MARCELL Project was presented to the participants of the Conference in this special context. All the seven languages in the MARCELL Activity belong to the category of less-resourced languages according to the META-NET Whitepaper series. In presenting the project at a poster session, Tamás Váradi emphasized that MARCELL can serve as a possible example for easily accessible source of data of substantial size and high quality. Furthermore, the body of legislative documents may also be exploited as a source for twenty one subdomains corresponding to the top level categories of the EUROVOC system, further enriching the possible datasets that can be accessed through the public data which is available in every country globally.

In addition to the poster, information about the MARCELL activity was also disseminated by flyers. 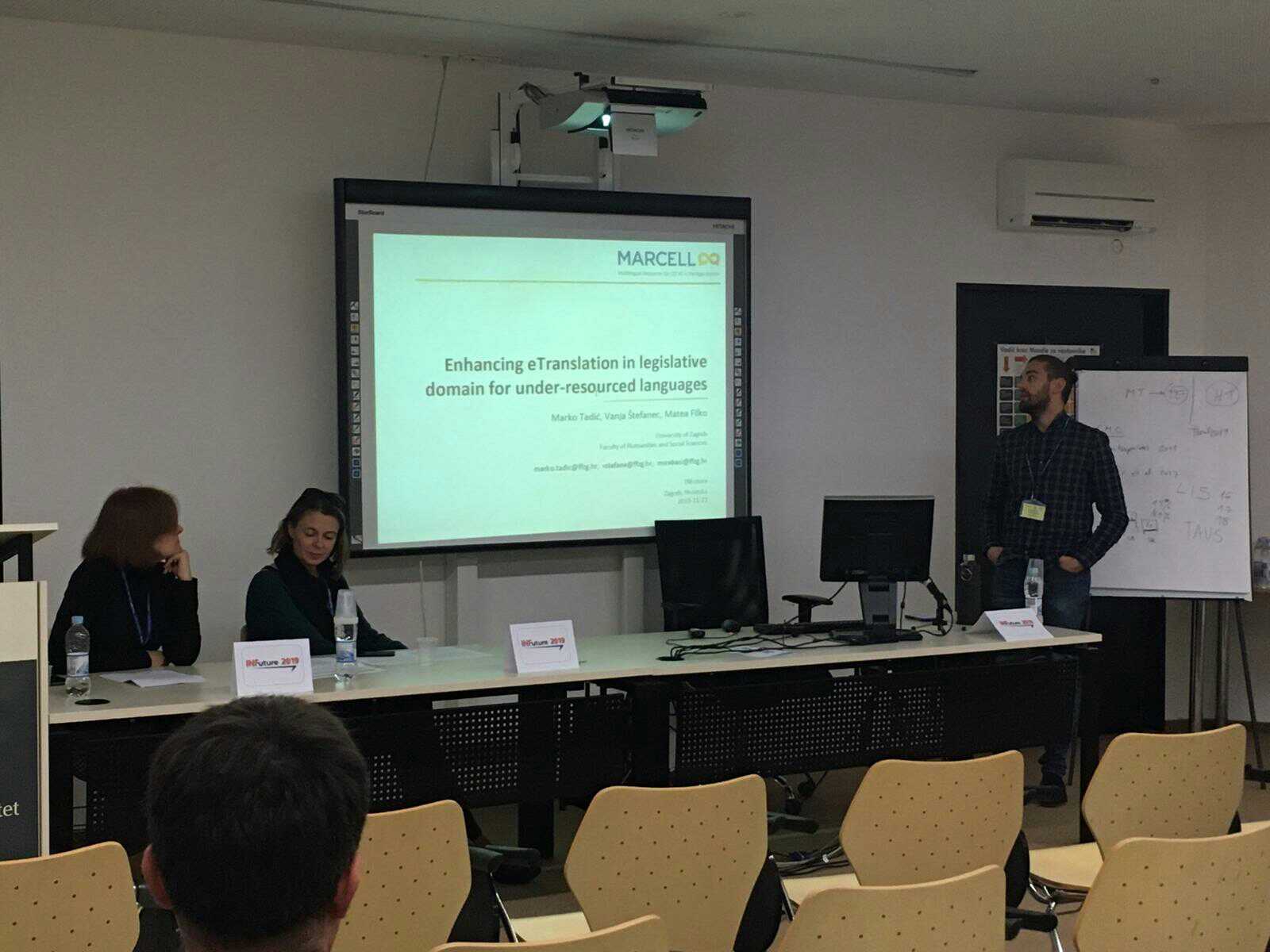 MARCELL presented at the INFuture2019 conference

The biannual INFuture2019 conference in information sciences was held in Zagreb on 2019-11-21 and 22. Participanats were many IT professionals, from research and industry, both, domestic and foreign experts. The MARCELL project was presented by Vanja Štefanec (FFZG) under the title “Enhancing eTranslation in Legislative Domain for Under-resourced Languages” on the first day of the conference in the session where other running EU-projects were also presented.

Additionally, the information about the MARCELL project was also disseminated by flyers. 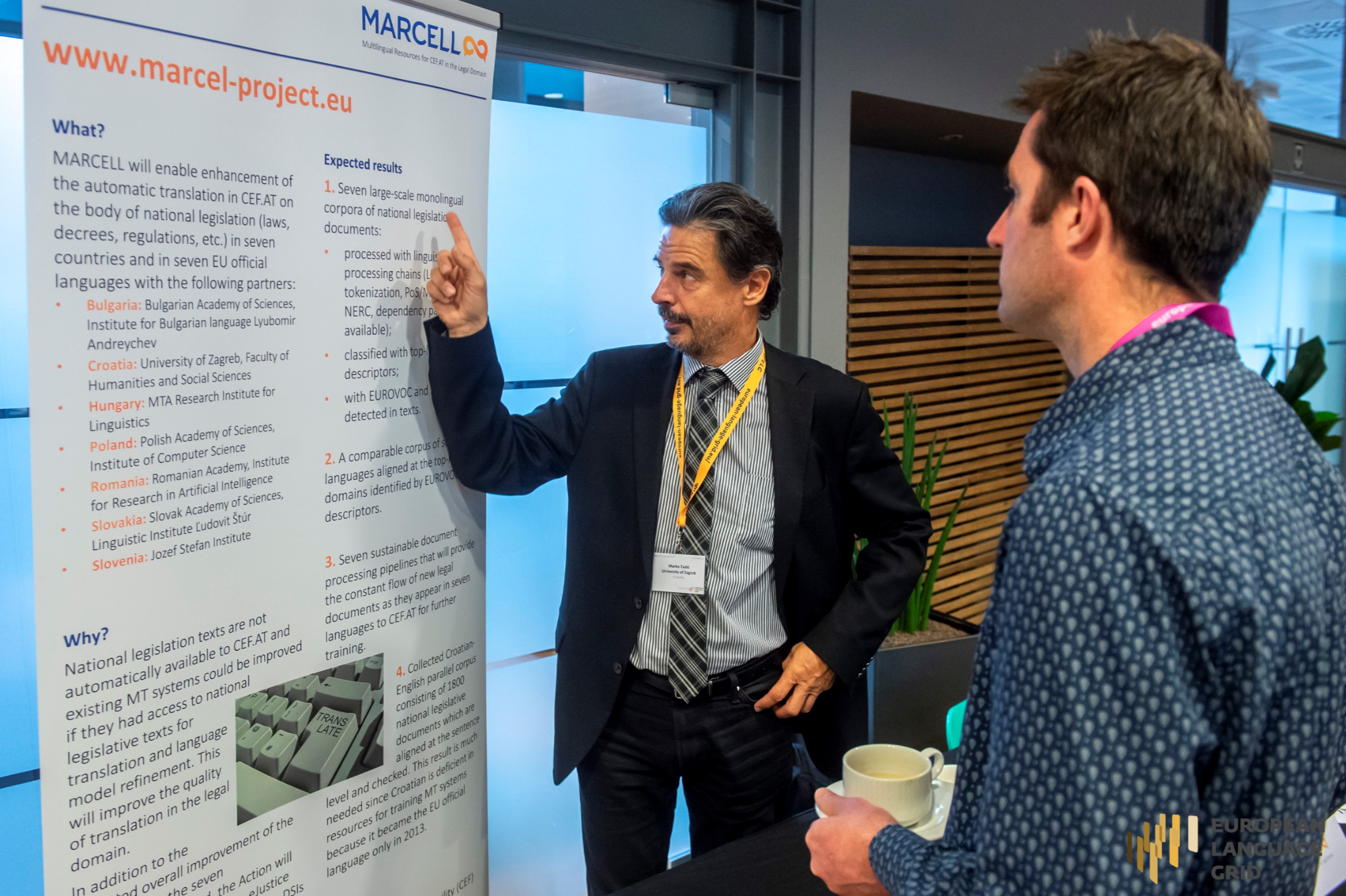 MARCELL presented at the META-FORUM 2019

The annual META-FORUM 2019 conference was held in Brussels on 2019-10-08 and 09. Participanats were many LT professionals, from both, research and industry, coming from practically all European member, CEF and candidate states. This event has become an important gathering of European LT community and that’s why MARCELL was presented there. Within the Project Expo sessions the MARCELL project was presented primarily by a roll-up poster which attracted a lot of attention and discussion since the expected results of MARCELL can become a potential source of linguistically processed data for several other running projects (e.g. LYNX, ELRC, Qurator etc.) that could directly use the multilayered annotation of large legal corpora of seven under-resourced and yet EU-official languages.

Additionally, the information about the MARCELL project was also disseminated by flyers. 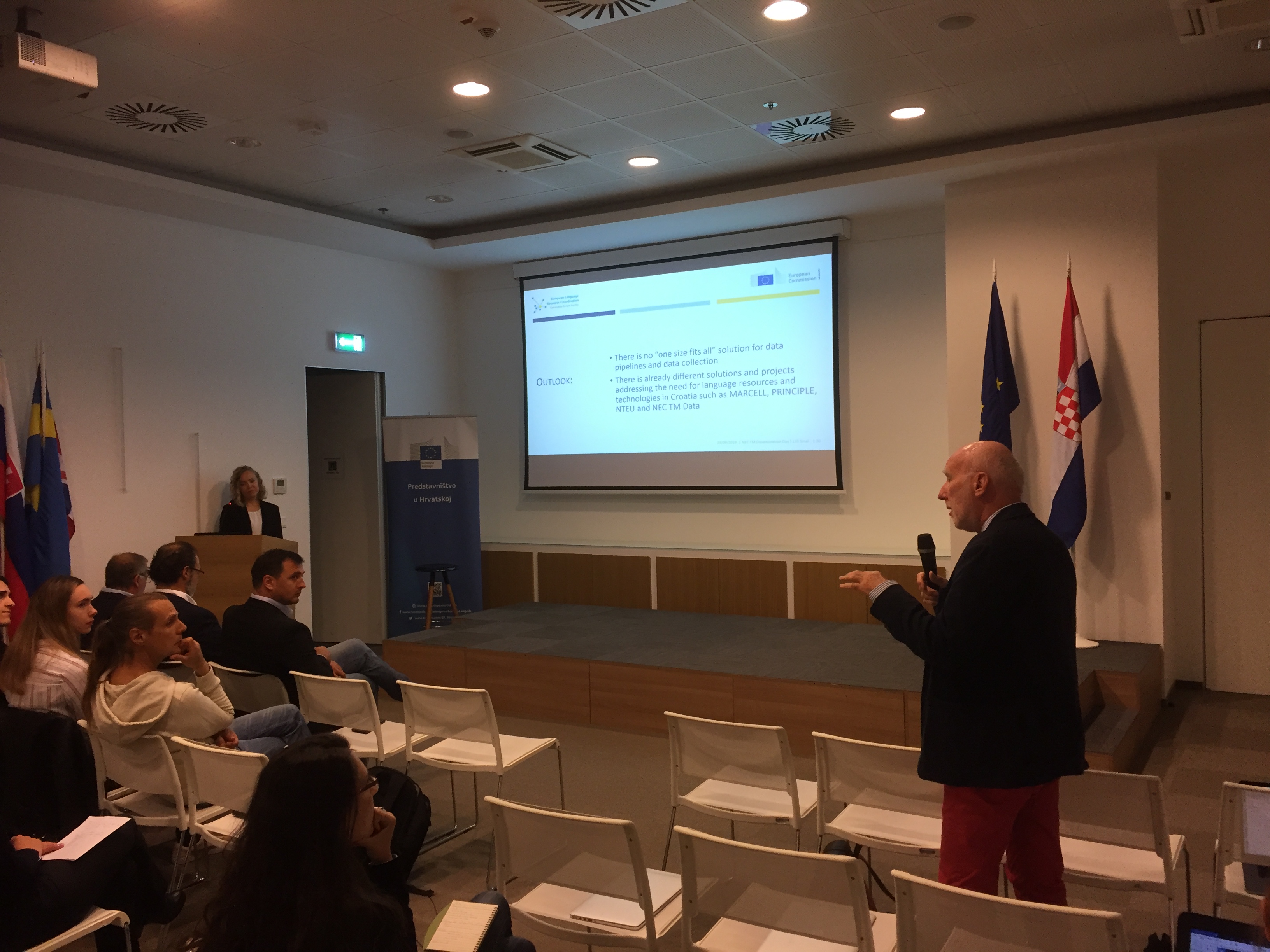 MARCELL presented at the NEC-TM workshop

The NEC-TM workshop was held on 23 September 2019 in Zagreb, Croatia. Within the general presentation of European Language Resources Coordination (ELRC) the MARCELL project was mentioned and presented with more details by its coordinator Tamás Váradi. In relation to the NEC-TM project, the results of MARCELL are very much expected.

Additionally, the information about the MARCELL project was also disseminated with a poster and flyers. 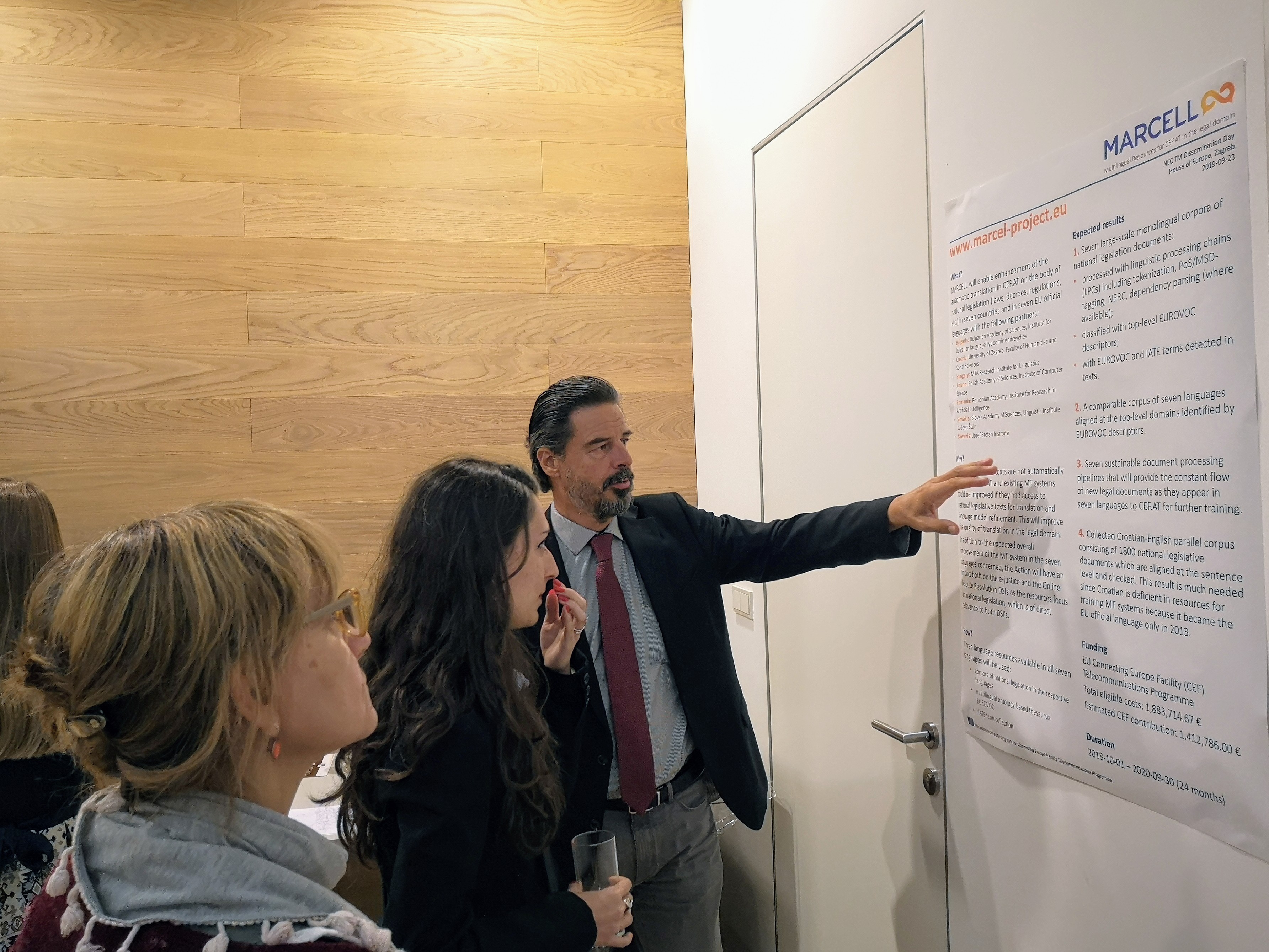 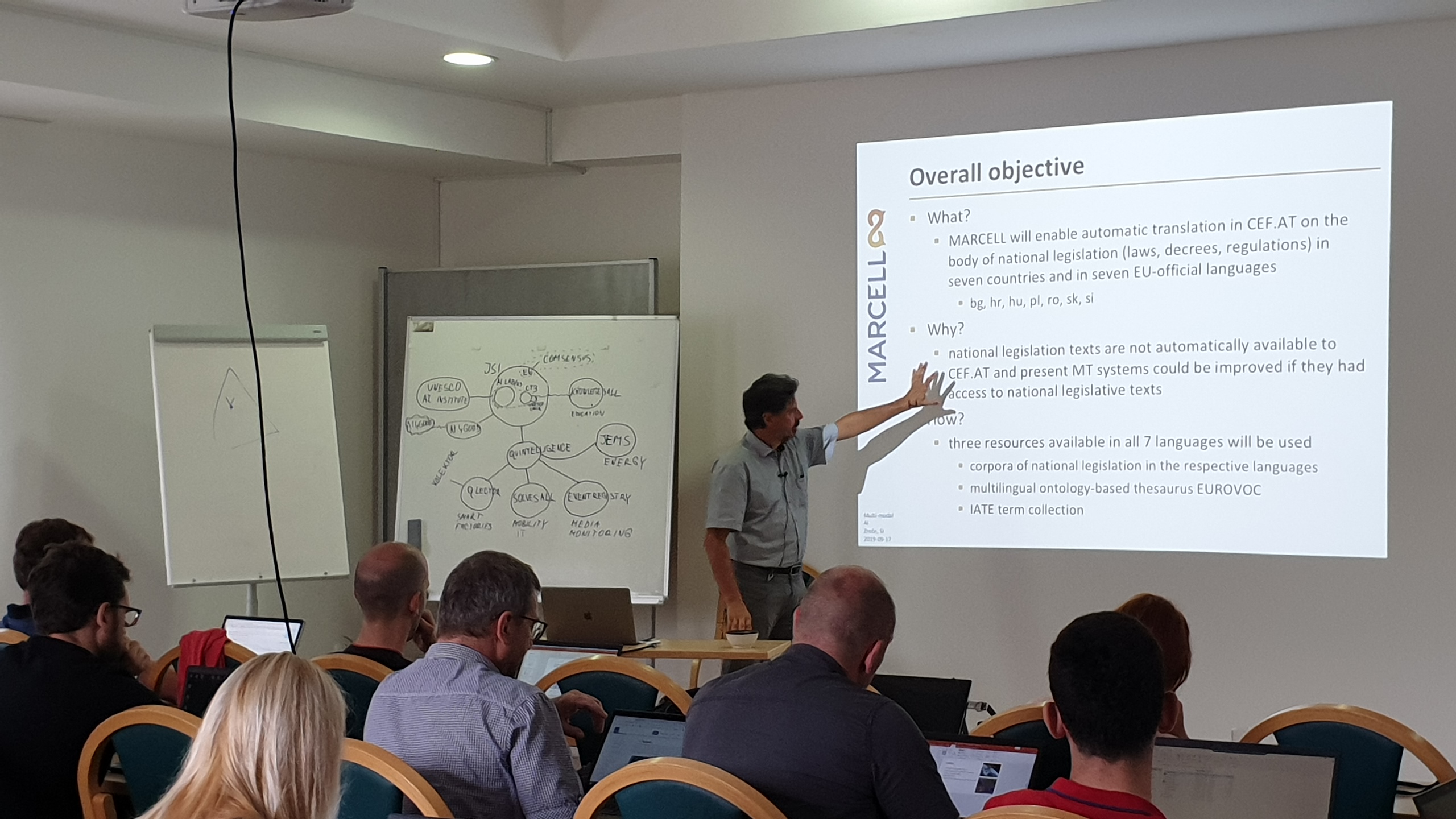 The Multi-modal Artificiall Intelligence Workshop was held from 16 to 18 September 2019 in Zreče, Slovenia. Among several EU-projects dealing with different AI topics, the MARCELL project was presented as a project that will enhance the quality of Neural Machine Translation systems when they will be used for translation of texts from the legal domain. Project was presented by Marko Tadić who explained the general aim of the project, specific tasks and expected results. 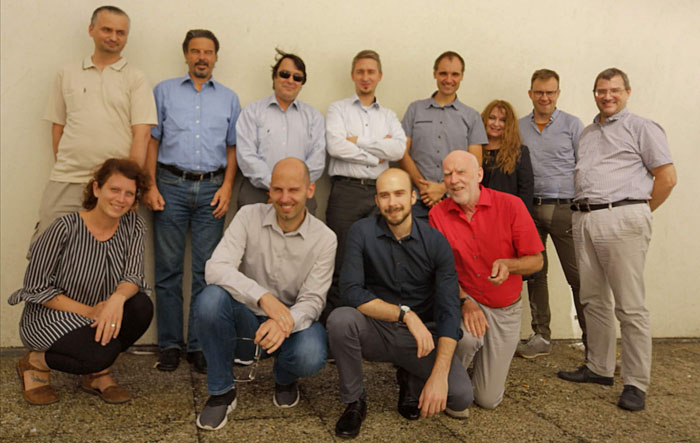 All individual activities of the MARCELL action were presented and the first steps were coordinated.